There is a local newspaper here, called 7 Days. It is distributed free of charge. Till some time last year, we too, used to get it delivered to our home free of charge, until, I discovered the most interesting thing in that newspaper is the “letter to editor, which is used as a tool by the foreign expats to vent out against so many mundane issues .. virtually anything will do !

One thing I never understand is the western people who come to work in Dubai !!  While they are in which ever western country that they come from, they have already heard hoards of stories about Dubai in the positive light. They are excieted, get a job and want to stay here. Yet as soon as they land up in Dubai, they start their whinning about EVERYTHING, wanting to make Dubai, a western country.

They forget this is a muslim arab country. The law is Shariah. The culture is Arabic and the Religion is Islam.

Imagine the audacity of a tiny portion of western ladies, wanting to go topless on the beach !!! Not only for the arab world, but in my opinion, for any part of the world, I think, it is utterly ridiculous and obsence ! I would not want to visit the public beaches with my 9 and 7 year old boys knowing they will be exposed to such indecency.  Thank God, these women are far inbetween the very minority of the foreign population.

At Mall of Emirates.

This photo was taken at Mall of the Emirates where they have a dress code !! It is pasted on every entrance yet women like her challenge it !   Can someone please explain how small can this woman’s shorts really get ?

This is one of the reasons, we have stopped going to Mercato Mall.  The crowd is a mix of older school students baring all their skin in minimalistic clothes. Behaving absolutely non-lady like. And they feel they are looked upon for such behaviour !!  Why are they inviting trouble ?? 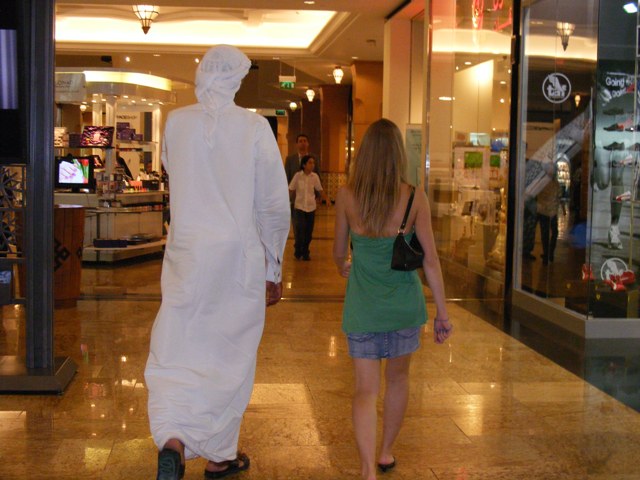 Whats really sad is that this girl does not have any respect for her arab friend, or else she would have worn something appropriate, looking less of a  _ _ _ _  indecent girl.

I too am a firm believer that women should be given independence and recognized for their capabilities. But I also believe that women tend to be their own worst enemy. They tend to push the limits with everything.. What are the chances of a girl wearing a typically small dress and passing a goup of boys who are going to enjoy the view and propably pass a comment or two ??  Well. thats it,  first they cause temptation and then they say, oh but I didnt mean for it to happen and he molested  me… ofcourse I am not talking about the majority of girls who have been caught up in some looney guys obsession or timely lust but I am talking about the ones, who went looking for trouble !

Here in the arab world,  rape and molestation is surely heard of but it is far and between R A R E !!  Thank God, for the harsh punishments they have for such crimes. Still these crimes do take place.

I wish people would love what they get when they come to Dubai:  freedom and security. How often do we hear of cars or homes being robbed ? VERY VERY RARE !  Infact there is “shock” if something like that happens.  Women can easily hail a cab or even commute at wee hours of the night, without ever having to fear some weirdo ! This is a safe place. You have the freedom, to wear what you want, speak as you would like, interact with a very multicultural crowd and learn so many customs of people of different regions and yet there are people who constantly whine and want to change things …. why are certain roads dug up ? why is the roads and transport authority switching the road system to placing names of the road/streets ? I mean really People whine about everything. If they dont like the city so much they should leave .. but that they wont becoz they already realize how good it feels to stay in the country where a chunk of your salary is not shared with the govt inform of taxes, this is the country of  the sun and the beautiful beaches and they enjoy modern amneties, malls, roads, freedom and security and ofcourse they also realize that they are only pushing the system to find out how much more can they try and change our good ole arab ways to the western ways of never being satisfied with anything.

While I have mentioned Western, I include australians, south africans, new zealanders etc and although geographically incorrect, even Indians !

Remember to forget.
Forget the stuff that’s weighing you down.
Forget the things that dim your natural brilliance.
Forget grudges and resentments.  Holding onto either is like taking poison and waiting for the other person to die.

Forget what anyone (including you!) has told you about your being too ugly, too pretty,  too dumb,  too smart, too fat, too skinny, too anything that slows you  down or zaps your confidence.

Forget what’s-his-name or what’s-her-name. What good is remembering them doing? So who needs ’em?!

Forget anything that’s taking away space in your brain, heart and memory from what’s important.
And the next time someone shakes their finger at you as if to say, “Didn’t I tell you that you should..?” Smile and say, “Oooooooooooooops,