This news has really outraged me !!

TV presenter causes outrage after posing with lion she killed

I have always believed that regardless of her career, her identity (of lack of it), her strength, her stamina and her nature, Women are the nurturer of life. Life, itself is impossible without women. Women are the cradle of the society to prosper in, grow in, develop in ~ and then some news like this prompts me to wonder, what kind of a sadist is THIS woman ??? Steve Irwin set a beautiful example of his life, placing conservation of wild animals much before his own life.  His love for crocodiles and all animals has been well known ~ and yet, there are heartless women like Melissa Backman.

It is unbelievably shocking that she or the likes of her, are being “allowed” to get away with hunting unprovoked animals !! She trespasses into their territory (or the little that has been left to them !) and still carries out these disgusting and brutal kills. Why ? Have we ever heard of an animal killing a human for fun ?? Did he ever hang our heads or hands close to his pond as a trophy ? Then why do we humans always show such insensitivity ? Why do we fail to understand, that each animal is a living thing ? Each and every living thing in this world is a MIRACLE ! We, as human, are capable of ending life, but have we EVER been able to bring forth life, except for the way, Almighty Allah swt has placed in our womb ??

Posing next to dead animals is nothing new for Ms Bachmann, who says she has been hunting since she was a child. Her Facebook page and personal website’s “trophy room” features many  such images, including a number with stags, alligators and bears.

A self professed “hardcore hunter”, her bio reads: “I have the best job in the world, great friends & family, and I’m usually pretty lucky. What more could a girl ask for??”

Last year Ms Bachman was removed as a contestant on the National Geographic show Ultimate Survival Alaska when over 13,000 people signed a petition criticising her inclusion.

I wonder what Steve Irwin and his family would have to say about this picture ???

These helpless animals were doing nothing to bring harm to her ~ they were just going about their daily grazing activities ~ little did they know,  that this intense smiling face belongs to a woman without any sense of compassion. 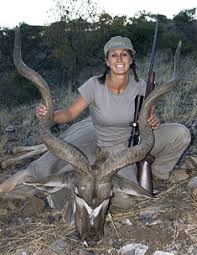 Has she ever heard of live and let live ???

Has she ever heard of an ecosystem where everyone has a place for a reason. And we humans were blessed with knowledge and compassion for a reason ~ not to gain popularity and “likes” on our facebook page !!

What can be more horrendous than all these beautiful animals lying next to a shameless heartless woman who took away their life “all for a sport” ????
0.000000 0.000000